Well, we are staying one more day.  We had to move from our site to another one 10 sites down.  The day broke beautiful and sunny.  Once we were all set up again, it was off on our next tourist attraction.

We headed over to Warm Springs over back country roads that Bob just loves to drive on.  We came across Callaway Gardens!  I didn't realize it was also in this area.  Goodness, there is a lot to see around here. But on to Warm Springs. 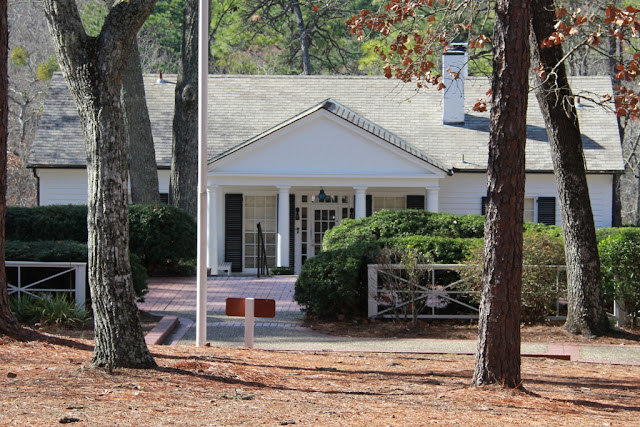 Warm Springs is home to FDR's Little White House.  It was built while he was still Governor of New York back in 1932.  It was a small, very plain cottage, containing only 6 rooms, three of which were bedrooms.  There was also an entrance hall, kitchen, and living-dining room.  It was here that FDR died of a stroke on April 12, 1945 less than a month before the end of WWII.  He came here to partake of the warm springs, which were said to have curative powers in helping with his polio. 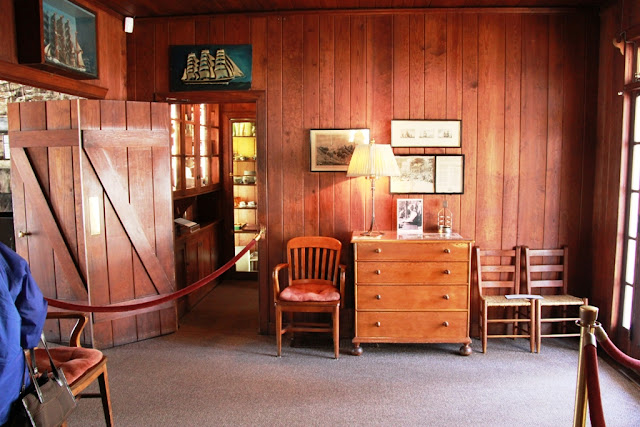 In everything we saw (read) and heard (movie), Roosevelt really was a President for the people from ALL walks of life.  Loved by all, he served an unprecedented 4 terms. 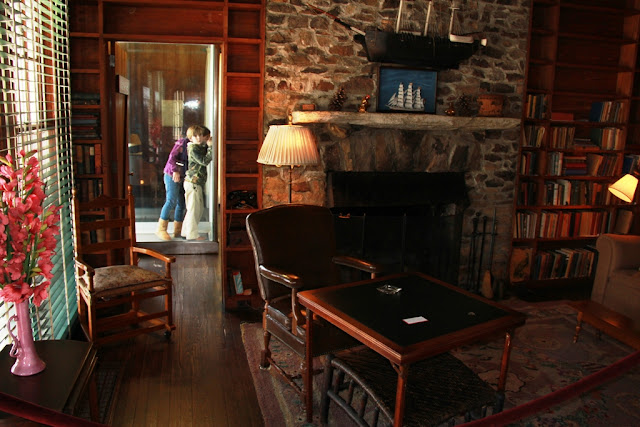 It was a wonderful day.  The weather was just right, warm and sunny.  Being in the midst of Christmas break, we did not run into scores of school children or the hordes of summer crowds.  This is not a National Historic Site, but belongs to the state of Georgia.  There was so much to see here, that I cannot possibly show it all with photos, but I am so glad we went. 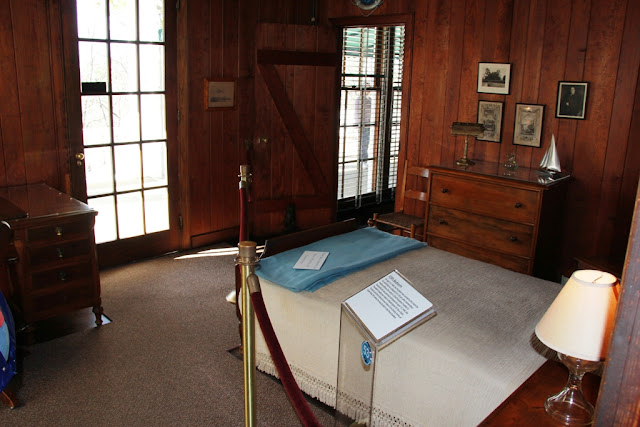 FDR's bedroom
As you can see from the pictures above, the rooms were very plain; nothing fancy about this place.  Yet, statesmen and foreign dignitaries came here at FDR's request.  And the guest quarters were just as plain.  For a man who was born with a silver spoon in his mouth, he definitely was a very down to earth person.  ﻿
﻿

Today was going to be a relaxing day, a recouping day. Hah!  We were going to just ride around the park and check out the camping sites to see how many were really here (a lot!).  Next thing I knew we were riding down the road to check out the local town of West Point.  The car didn't know when to stop and I kept fiddling with the tablet and I kept finding all this neat stuff.  Next thing you know we are headed about 40 miles down the road to the Tuskegee Airmen National Historic Site.
It was too close to ignore.  It was wonderful.  It's not a large place but it told a brave story of the wonderful men (and women) who went on to become pilots and officers during WWII.  A lot of history was written in that place and it's wonderful that it has not been forgotten or overlooked.  By the end of the war over a thousand African American men had become pilots in the Army Air Corp. (AAC) And there were many more African American men and women whose jobs were necessary for all this to be accomplished. 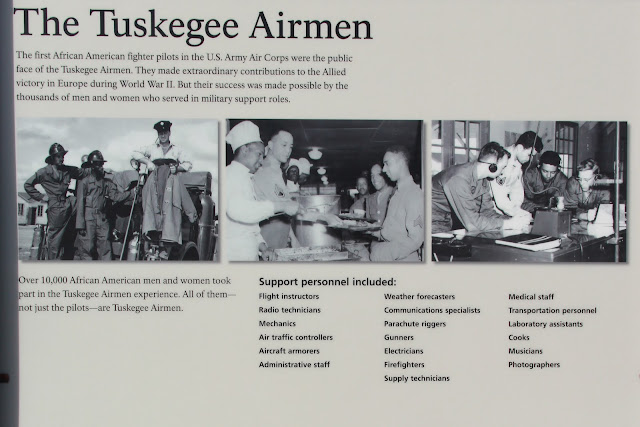 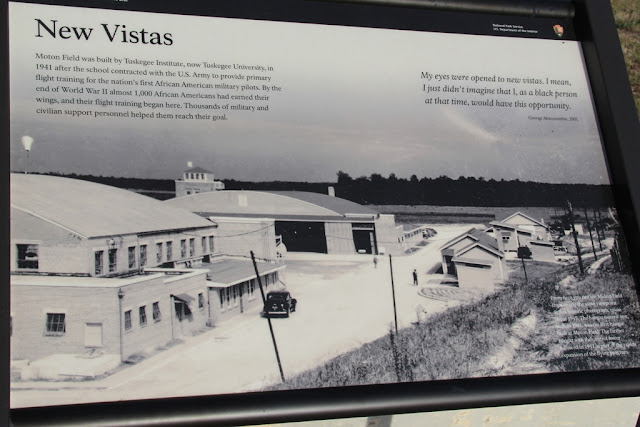 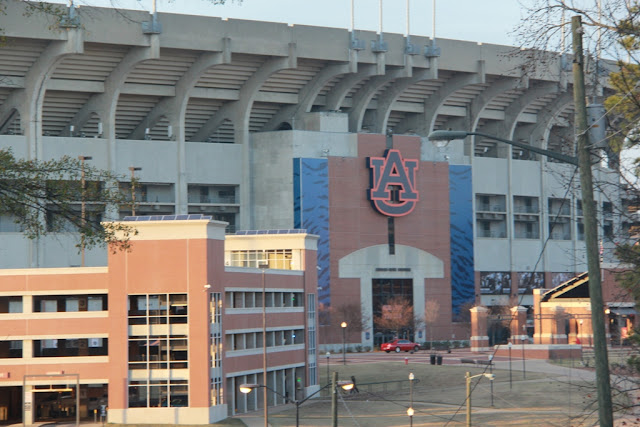 !
This is one HUGE stadium.  I THINK they take their footbal seriously! 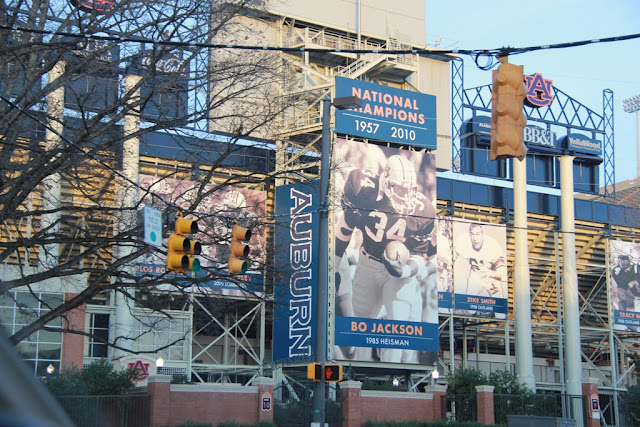 You can see this stadium from anywhere on campus.
There was another place I discovered I wanted to see but it was too late in the day.  We are going to see if we can check it out tomorrow before we have to leave.  Tune in tomorrow to see what happens. :)
By The Way: On the way home, driving back towards the town of West Point, on the right side of the road, I saw a manufacturing facility of West Point/Stevens!
In the town itself, I saw old manufacturing plants where sheets and towels probably used to be made.  Alas, these building were being torn down.
﻿
﻿
Posted by CramALotIn at 11:46 PM No comments:

On The Road Again

Today is the first day of a new journey. After having spent Christmas with my oldest daughter and family it is time to move on. We were going to head due West, but after looking at the weather channel and all the winter storms with snow and ice, we decided it was a better idea to head South. We traveled in a light rain most of the day. 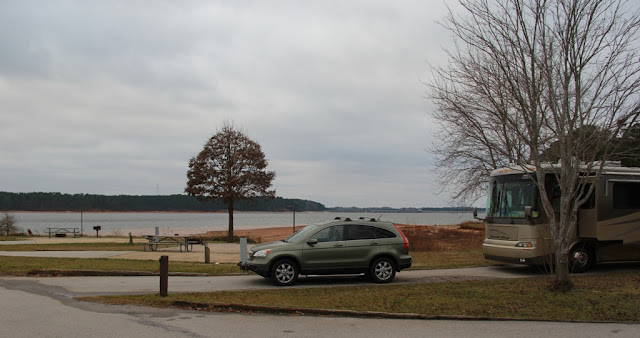 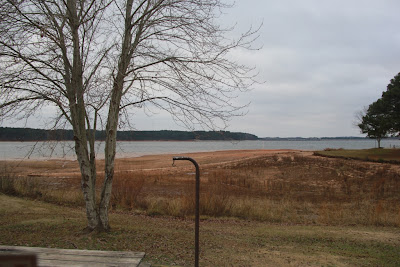 View from our bedroom window.
As you can see from the pictures above it was a very gray cloudy day.  But if this was a lovely summer day in June, we would be sitting here lake front enjoying a breeze and lots of sunshine!  Alas, it is not to be.  Going to relax and figure out our next move depending on the weather.
﻿
﻿
Posted by CramALotIn at 12:23 AM No comments: